JYJ, a group with a career fraught with pitfalls

JYJ is one of these many successful Korean boybands. The group is composed of 3 members, all of them being former DBSK members: Jae Joong (Hero), Jun Su (Xiah) and Yoo Cheon (Micky). If these three young singers are enjoying a great success among fans to the point of holding concerts in Europe, one can’t deny that they had a lot of troubles before coming this far, and it’s still the same case… 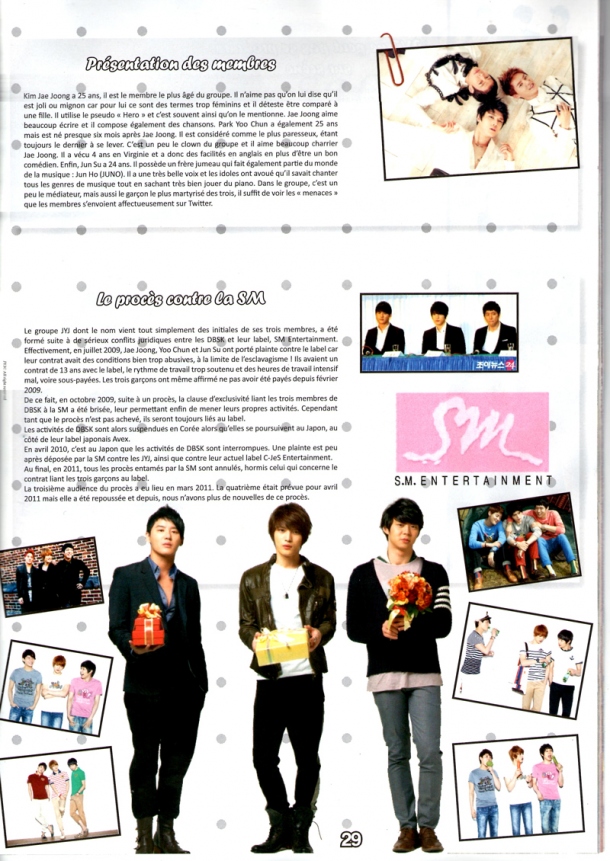 Presentation of the members:

Kim Jaejoong is 25 years old. He’s the oldest member of the group. He doesn’t like being told he’s pretty or cute because to him these are too feminine terms and he hates being compared to a girl. He uses the pseudonym “Hero” and he’s often mentionned like that. Jae Joong likes writing a lot and he also composes songs. Park Yoo Chun is also 25 but was born nearly 6 months after Jae Joong. He’s considered as the laziest member being always the latest one to get up. He’s a bit like the clown of the group and he likes teasing Jae Joong a lot. He lived 4 years in Virginia so he has fluency in English in addition to being a good actor. Finally, Jun Su is 24. He has a twin brother who’s also part of the musical world: Jun Ho (JUNO). He has a very beautiful voice and idols have revealed that he could sing all kinds of music knowing very well how to play the piano at the same time. In the group, he’s a bit like the mediator, but also the most bullied boy out of the three, you just need to see the “threats” members are sending each other on Twitter.

The lawsuit against SM:

The group JYJ whose name comes quite simply from the initials of the three members, has been formed following serious legal disputes between DBSK and their label SM Entertainment. Indeed, in July 2009, Jae Joong, Yoo Chun and Jun Su filed a complaint against their label because their contract had too much abusive conditions, to the limit of slavery! They had a 13-year-long contract with the label, work rythmm too steady and intensive work hours badly if not to say underpaid. The three boys have even declared not having been paid since February 2009.

Thus, in October 2009, following a lawsuit, the exclusive clause binding the three DBSK members to SM has been broken, allowing them finally to carry their own activities. However, as long as the lawsuit is not finished, they will always be bound to the label.

DBSK activities are then suspended in Korea while being carried on in Japan at their Japanese label side Avex.

In April 2010, DBSK Japanese activities are interrupted. A complaint is filed a little after by SM against JYJ and their current label C-JeS Entertainment. In the end, in 2011, all the lawsuits initiated by SM have been cancelled, except the one which concerns the contract binding the three boys to the label.

The 3rd hearing of the lawsuit was held in March 2011. The 4th one was scheduled for April 2011 but had been postponed and since, we have no news of this lawsuit. 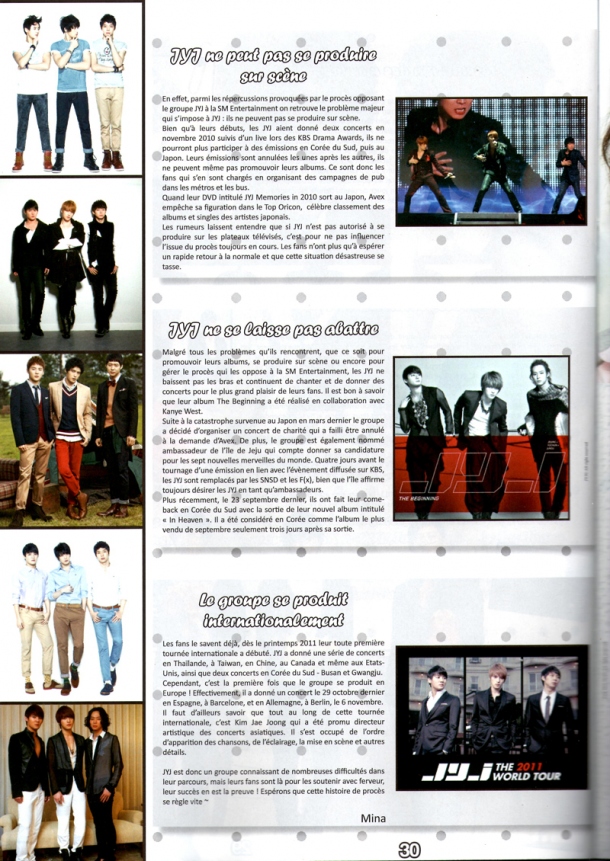 Indeed, among the consequences of the lawsuit that opposes JYJ and SM Entertainment, we can see the biggest problem that JYJ is facing: they can’t perform on stage. Even though after debuting, JYJ had two concerts in November 2010 as well as a live performance during the KBS Drama Awards, they won’t be allowed anymore to participate to shows in South Korea, and then in Japan. Their shows are cancelled one by one, and they can’t even promote their albums. It his hence the fans who took care of the promotion by organizing ads campaigns in the subway and buses.

When their DVD entitled JYJ Memories in 2010 was released in Japan, Avex prevents it from appearing in the Oricon Chart, famous ranking for Japanese artists’ singles and albums.

Rumors tend to say that if JYJ isn’t allowed to appear on TV, it is to avoid influencing the ongoing lawsuit. Fans can only hope for this situation to quickly get solved so that this desastrous situation will end.

JYJ doesn’t let it get them down

Despite all the problems they meet, whether it’s to produce their albums, perform on a stage or to handle their lawsuit against SM Entertainment, JYJ doesn’t give up and they keep singing and performing, to their fans’ greatest happiness. It’s good to notice that their “The Beginning” album has been made with the collaboration of Kanye West.

Following the disaster that happened in Japan back in March, the group decided to organize a charity concert that almost got cancelled on Avex’ request. Beside, the group also was appointed ambassadors for JeJu Island that was a candidate for the 7 new wonders of the world. Four days before a TV show broadcasted on KBS was recorded, JYJ has been replaced by SNSD and F(X), even though the Island affirms that they still wanted JYJ as ambassadors.

More recently, on September, 23th, they did their come-back in South Korea with the release of their new album entitled “In Heaven”. It has been considered in Korea as the album that sold the most in September 3 days only after its release.

Fans already know it, in Spring 2011, their very first worldwide tour started. JYJ gave a round of concerts in Thailand, Taiwan, China, Canada and even in the United States, as well as concerts in South Korea in Busan and Gwangju.

However, it is the first time that the group performs in Europe! Indeed, they had a concert on October, 29th in Barcelona, Spain, and one on November, 6th in Berlin, Germany. We should also notice that during this worldwide tour, Kim Jaejoong has been put in charge of the setlist, lightning, directing and such for all the asian concerts.

In short, JYJ is a group that is facing a lot of difficulties on their way, but their fans are here to vividly support them, as proven by their success! Let’s hope that this lawsuit will come soon to an end.