Cartoons and parodies of the CF are being shared via SNS. 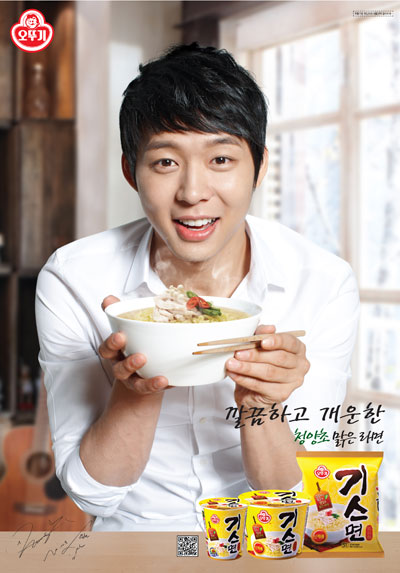 This is due to fans who received the news of [Yuchun] shooting the CF started producing and sharing various and interesting self-made contents such as cartoons or parody videos of Park Yuchun’s Gismen CF via Social Network Sites (SNS).

Four pictures of the photo shoot and a teaser video of the CF were released after the CF was shoot on the 5th, and they became a popular topic among Park Yuchun’s fans. The teaser video showed Park Yuchun singing the Gismen song and playing ukulele while facing the window on a snow day. Fans showed enthusiastic interest in Park Yuchun’s smiles. Especially, the theme song that used the popular song ‘Kiss Me Darling’ melted fans’ heart with the lyrics, ‘Gismen Darling, Gismen Gismen tonight~’

Also, SNS and on-line cafes that post CF videos and parody contents had replies such as ‘My family will have one Gismen per day this winter’, ‘I’m making a list of people whom I will give Gismen as gifts’, ‘Let’s all pick a day so we can do ‘Gismen tonight’ sometime’, and ‘Let’s get together on-line [to eat Gismen]’. Foreign as well as domestic fans and ramen lovers showing anticipation is inducing the purchase of Gismen thus leading Gismen to be promoted.

On the other hand, eight million Gismen were sold after only one month of the launch of the product. On 15th, Gismen cup ramen in size 105g and 62g was newly launched.

Source: Asia Today via Nate
Translation by: MuggleAjumma of JYJ3
Shared by: JYJ3
Please do not add to, alter, or remove the credits.