END_OF_DOCUMENT_TOKEN_TO_BE_REPLACED

After the “TVXQ crisis” that has been causing a disruption similar to a nuclear blast in the Korean music industry for the past two years occurred, a book that looks into the foundations of this case has finally been written. This book, published by EnterPost and entitled Prosper JYJ (author Kim BumTae) is now for sale.

This book looks into the ‘faceless’ singers JYJ who ‘cannot perform on music shows even if their sales are number 1’ and makes sure that the issues facing them are squarely raised. The large agencies, entertainment organizations and broadcasters, including those who have been placed in the entertainment industry as merely shareholders used to make sure the corrupt system does not collapse, have created a cartel-like structure around artists like JYJ. This book includes information from various media blogs, such as EnterPost’s popular 3 month long series “JYJ walking back to the tent”.  END_OF_DOCUMENT_TOKEN_TO_BE_REPLACED

Park Yoochun, who has starred in MBC’s Miss Ripley and KBS2’s Sunkyungkwan scandal, is reinventing the notion of idol actors. What is it about Park Yoochun make casting directors want to hire him? Various directors talked about these points.

“Punch” Director Lee Han: If you look at KBS2’s Sungkyunkwan Scandal you will see that both the emotional feel and the pronunciation [of Park Yoochun], both of which are crucially important, are good. It makes him see as though he has his fundamentals set. That is something that comes in part from being a singer. In a sense, idols are used to showing various expressions on stage while singing songs for their fans. Also they do not have a fear of the cameras and can quickly adapt [to drama settings].  END_OF_DOCUMENT_TOKEN_TO_BE_REPLACED

1. Junsu’s interview will be broadcasted in Japanese BS channel

【NOTICE-!】 We will send you the interview of “Kim Junsu of JYJ”! From this Sunday, our Hanlove staff went to Seoul for the interview. The broadcast will be on new year! Of course, this is his first time on the program-♪ 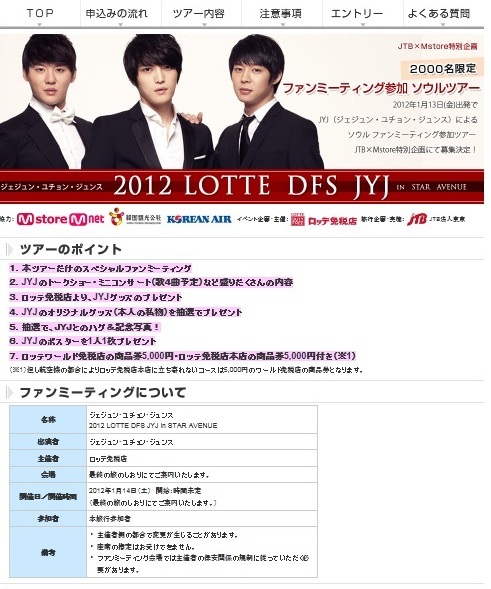 END_OF_DOCUMENT_TOKEN_TO_BE_REPLACED

Cho Young-Pil created a huge fanclub made of young teenagers for the first time in Korea. Seo Tae-Ji was named president of culture and H.O.T. became a foundation of Korean fanclubs thanks to its “agressivity”.

At that time, fans were listening again and again the audio tapes of their artists, until the day when they wanted more. That’s why they started to wait in front of the banks for hours to buy concert tickets. Fans have sent a lot of letters and gifts to idols, a especially thanks to the Internet, they’ve posted videos in which they thing their favorite songs on Youtube. A new branch is opening, in which fans can show in a quite original way how they support their favorite artists.

K-Wave has interviewed a fan-artist called Yogi, who became popular thanks to the fandom that she joined: JYJ’s. With her drawings, she became famous among the members of JYJ fandom. Her blogs keep the highest number of visits, even when she doesn’t post drawings.  END_OF_DOCUMENT_TOKEN_TO_BE_REPLACED

“We’ve spent the night together”.

This is a “Protect the Boss” couple (who was recently broadcasted on SBS” that many fans are fond of.

The main couples of the drama are the “boss-secretary” couple, called Bobi couple, and the couple of Seo Na Yoon and Cha Moo Won, called Namu couple. But in addition to these two couples, the “ChaCha” duo (Cha Ji Heon and Cha Moo Won) is very popular among fans. Furthermore, many fans created after this the “ChaCha game”, which consists in reenacting the scene in which Ji Heon, who is mysophobic, touched Moo Won’s cheek when they were taking care of each others after drinking too much.

Actually, the atmosphere before the drama starts was a serious one. However, Ji Sung revealed that Jaejoong and him have slept in the same bed together, wearing only underwears the night following the drama presentation by the production team.  END_OF_DOCUMENT_TOKEN_TO_BE_REPLACED

The group JYJ – from Asia to the USA to Europe… A Spain-Germain tour.

The group JYJ, composed of Jaejoong, Yoochun and Junsu, gave their first concert in Europe.

On October, 29th, JYJ lauched the first concert of their European tour in Spain. After Spain, the second performance was held in Berlin, in the Tempodrom, where the winner of “Britain’s got talent” recently held a concert.

CJ Entertainment (C-JeS), who is responsible for JYJ’s management, said that after the release of JYJ’s worldwide album, there’s been so many love calls from Eastern and Northern Europe that it was impossible for them to not perform there.

C-JeS admits that “the choice of the cities for the European tour was a strategy to reach Northern, Western and Eastern Europe”. And we can understand them!

The promoter of the Spain concert explains that the reason for JYJ’s popularity in Europe is their particular music that fits their European fans’ taste, but also because they produced and album in english, and most of all because of their great abilities as live performers.  END_OF_DOCUMENT_TOKEN_TO_BE_REPLACED