END_OF_DOCUMENT_TOKEN_TO_BE_REPLACED

JYJ member Park Yoochun finally makes known to the public the “styles” for which he and his fellow members Junsu and Jaejoong monitor each other. On the evening of March 5th at Jamsil Lotte Hotel during the press conference for his new Wed-Thur drama “Rooftop Prince”, Park Yoochun said that his fellow JYJ members have always monitored his performance through the eyes of viewers.

When asked if he did any monitoring himself, Park Yoochun said, “A while back I went to go see a play. I also saw Jaejoong Hyung’s “Protect the Boss” when it came out. Rather than monitoring each other’s performance, we like to have fun viewing the performance as if we were part of the audience.” Also, “We prefer our own privacy rather than talking about our work specifically with each other.”

He also said, “Rather than giving character analysis, feedback or critique, we treat/buy each other food to encourage one another”

Park Yoochun also stated that rather than giving the other two members advice, he takes a step back and simply trusts the other members will do well. He says his job is simply to cheer them on.

Source: Oh My News via Nate
Trans by: buniustyle of JYJ3
Shared by: JYJ3
Please do not delete or modify credits.

This March 11 the k-pop fans will have the opportunity to be near one of the most important boy bands of the moment: JYJ will be performing a concert in Lima like the best shows in the world.

The boy band will perform at the Esplanade south of the Estadio Monumental in Ate starting at 8 pm in an event that includes digital set design, runway, special effects and sound quality first class at the same height of the concerts JYJ has offered in Seoul and Barcelona, confirmed by Noizu Productions.

It should be noted that for an event of this magnitude the organizers take the appropriate security measures to accommodate the thousands of fans who attend the stadium Peruvians and many who come from Ecuador, Bolivia, Venezuela, among others.

“We have the best security for the event day, ambulances, firefighters, police and we also have an agreement with the nearest clinic if there is a problem in the concert“, Young said as reported.

Han Ji Min and Park Yoo Chun say they don’ want to mind series by other broadcast stations that will be airing at the same time.

JYJ’s Yoo Chun was present at the gathering when the production of Rooftop Prince (written by Lee Hee Myung and produced by Shin Yoon Sub) was announced, which was held at the Lotte Hotel in Jamsil, Seoul on March 5 at 2:30 p.m. He mentioned other series, saying “I’ve read loads of articles discussing The King 2Hearts, Equator Man, and Rooftop Prince beginning to air at the same time.”

He added, “I don’t want to mind the other series because I don’t think we’re in a competitive relationship. Their genres are much different. We expect our comic genre appeals to you because the economic conditions are not good. I feel a bit of pressure on doing better, shooting the series.”

The actress said, “It always happens that TV series by other production air at the same time, so I’m not worried about it. I was just attracted by characters and stories of our series, and I guess other series have their own styles. There are people of different tastes nowadays, and they can choose what they want to watch. I’ll just do my best at whatever I can.”

Rooftop Prince has a concept of time travel and the story is about Prince Lee Gak (Yoochun) who travels to the future, from Joseon Dynasty era (about 300 years ago) to modern days (Seoul, in 2012), to meet the girl he loves, Park Ha (Han Ji Min) after they drift away in Joseon Dynasty era.

The first episode is to air on March 24 after the series Take Care of Us, Captain comes to an end. 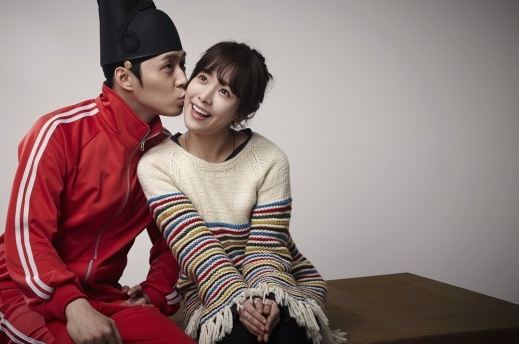 On March 5, Yoochun attended the press conference for “Rooftop Prince.” He opened up by saying, “I saw on the web that comparing ‘Rooftop Prince,’ ‘The King 2Hearts,’ and ‘The Equator Man.’ To be honest with you, I don’t really care much about it while filming the drama. Each of the drama has different genres, so I think the fans will like the comic side of ‘Rooftop Prince.’”

END_OF_DOCUMENT_TOKEN_TO_BE_REPLACED

JYJ’s Jaejoong shared a photo of his luxurious dining room. On March 4, Jaejoong tweeted the photo with the caption that read, “Monitoring Junsu and Yoochun! My cool and good looking members and little brothers. I watched Yoochun and Junsu but of course they never grow old. The best.”

In the photo, Jaejoong is seen sitting at the dining table, holding a wine glass and watching clips of Yoochun and Junsu through his laptop. In particular, fans have been impressed by the fancy-looking decorations in his dining room. The giant window and neat wall decorations, as well as the luxury chandelier have caught the attention of the fans.

Netizens who came across the photo commented, “Your house is dope,” “It’s overwhelmingly nice,” “I thought it was a hotel.”
Meanwhile, JYJ’s Junsu is currently starring in the musical “Elizabeth,” while Yoochun has been filming upcoming SBS drama, “Rooftop Prince.”