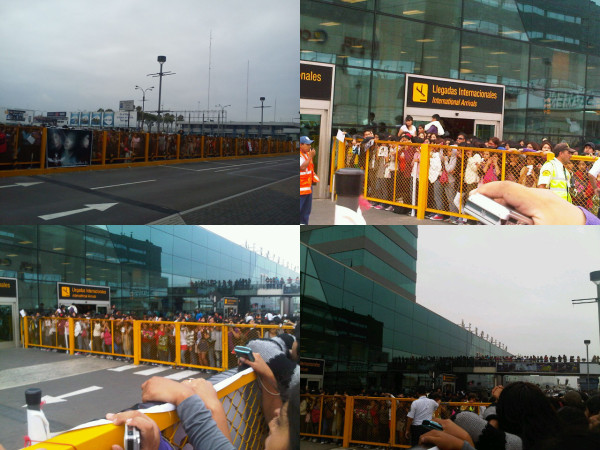 With the increase of K-pop concerts worldwide, airports all over the world have been experiencing the Hallyu wave in full, finding out rapidly that dealing with K-pop fans means more than just posting a guard or two at the arrival gate.

While the likes of JFK and Heathrow airports having already had their share of the excitement with SM Town and Beast’s World Tour respectively, neither have had to deal with what Jorge Chávez International Airport in Lima, Peru went through for JYJ‘s arrival.

The fans showed up to the airport over 3,000 strong to support JYJ. It looks as though airport security had a hunch that there were going to be a lot of fans and it looks mostly organized. Fences were set up to keep the members as well as the fans safe. When the crowd got so deep that fans in the back couldn’t see, they started lining up on the bridge a fair distance away from the exit of the airport, hanging banners and getting their cameras ready.

The passion that K-pop fans have is amazing. Despite the recent controversy that has hit the group, fan support looks to be at the strongest point it has ever reached. Are you excited for JYJ’s concert in Peru? Would you be out there with the fans if you were in the country? Let us know in the comments!