END_OF_DOCUMENT_TOKEN_TO_BE_REPLACED

Boy band JYJ held a concert at Teatro Caupolicán in San Diego, Chile, on Friday (local time), becoming the first Korean group to perform solo in Latin America. The venue was packed some two hours before the concert got under way, with over 3,000 fans hunkering down to catch a glimpse of the Asian pin-ups.

In the days leading up to the concert, hundreds of fans from other parts of Latin America such as Brazil, Columbia, Mexico and Venezuela camped at a nearby parking lot to make sure they got a seat at the concert.

The spectators went wild throughout the concert, cheering and waving their national flags. During the show, three people were reported to have fainted and were carried out of the premises.

The performance was part of the group’s world tour, which started last April and ended on Sunday in Lima, Peru.

Chilean reporters who were present at the latest concert said, “K-pop fans here currently number 20,000 to 30,000. But once Korean singers’ music is released through official channels, their fan base will surely expand further.”

Reporter: On the 9th [local time] JYJ’s concert in Santiago, Chile was held. It was here that I met fans that were almost more passionate than fans from other parts of the world. They were filled with emotion after meeting Korean singers for the first time. Here I will introduce the fans’ first impressions of meeting them.

Last Saturday we came from Bolivia to Santiago in order to see JYJ’s concert. When we listen to JYJ’s music and when we watch their performance videos we gain hope. I especially like the dances where they ask fans to participate/follow along. Compared to only watching their performances on the internet, the live performance is like a dream. Even though we were waiting outside all night long, the thought that we are able to see JYJ keeps us from feeling tired. Because JYJ came to South America, I am very thankful. After the Chile concert, in order to cheer for the boys, we plan to go to the Peru concert as well.

As I still am not able to earn a lot of money, I saved for weeks. I was narrowly able to pay for the concert ticket and transportation. However, never in my mind did I think that I’d be able to see my favorite singers in Chile. If they had come to Argentina that would have been better, however the fact that I am able to see them at all makes me content. I hope we create good memories here at JYJ’s Chile Concert.

END_OF_DOCUMENT_TOKEN_TO_BE_REPLACED 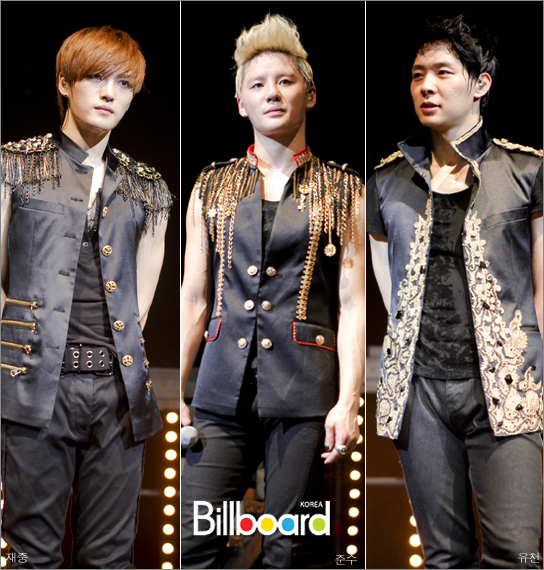 After 3 members from TVXQ, Jaejoong, Yoochun, and Junsu, left to form the group JYJ,they have been met with extraordinary success. The latest stop on their whirlwind adventure brought JYJ to Chile, where they are covering uncharted territory. On March 9th(local time) JYJ performed a concert in Santiago, Chile as part of their ’2011-2012 JYJ World Tour’, marking the first time any Korean act has performed an exclusive concert in South America. The World Tour started on April 2nd of last year  in Bangkok Thailand and comes to a close with their concert in Lima, Peru on March 11th.

At the end of this year long journey, JYJ is now standing on the other side of the world. As the Peru concert, and thus the end of the ’2011-2012′ World Tour, draws near we will share record numbers that JYJ has accomplished.

#18- JYJ’s concert, which spanned Asia, North America, Europe included 13 different cities (not included Santiago, Chile and Lima, Peru) for a total of 18 shows. For the South American leg of their tour, JYJ opened in Chile where they sang remixed versions of many of their songs.

#20- JYJ’s management agency, C-JeS Entertainment, said that well over 200,000 fans came out for the 13 city ‘JYJ 2011-2012 World Tour’. The 4 city North American leg of the tour was organized by AEG, which is America’s biggest promoter, and was the largest scale exclusive contract that an Asian performer has ever had with them.

#9000- The new concerts that are taking place in Chile and Peru also recorded a sell out of 9000 tickets total. In Chile, JYJ performed to a completely full crowd of 3000 people in Teatro Caupolican and the concert in Peru’s Explanada Sur del Estadio Monumental sold out all of the 6000 tickets they had put for sale. Originally promoters in Peru released 5,000 tickets and had to hastily add 1,000 additional seats once those sold out at an amazing rate. On the continually sold out shows, one of Peru’s most influential newspapers, El Comercio, reported “It was Korean Artist JYJ…not Justin Bieber or Miley Cyrus…that made new records of ticket sales in the country”. The South American promoter who organized the concert stated “Even famous American pop acts cannot sell out tickets so quickly after the ticket sales are open. JYJ’s level of popularity is incredible.”

#230,000-  For the performance in Lima, Peru the super VIP seats cost 230,000 won. C-JeS Entertainment stated “these tickets are standing tickets for on the floor. Because they will be standing right in front of the 3 members, they can have a close experience with them during the concert”. The last artists that performed in the same venue and sold tickets at similar prices were the popular Japanese band X Japan and American pop artist Britney Spears, which shows the level of popularity that JYJ is also on.  Peru’s concert tickets tend to be more expensive because a 40% tax is placed on tickets from foreign performers. In Chile, VIP tickets were priced at 70,000 pesos (approximately 160,000 won).

Junsu Shared a picture through twitter of the beach in Peru. What do you think? Doesn’t it just make you want to just hop on a plane and visit the scene!