END_OF_DOCUMENT_TOKEN_TO_BE_REPLACED

Touching drama captures the viewers’ hearts and dramas which have OST sang by the actors have higher audience engagement.

Both Song SeungHyun and Kim Jaejoong participated in making the OST for MBC TV’s Dr. Jin. Kim Jaejoong’s Living Like A Dream is different from the other OSTs on many levels, starting from his seasoned and well-trained vocals. The OST is unique as it was not a theme song for his own character; rather it was a song about Song SeungHyun’s heartrending love for Park MinYoung in the drama. He even wrote the lyrics personally. The OST conveyed Jin Hyuk (Song SeungHyun)’s feelings on a much deeper level.

Source : nate
Translated by : Shermin of JYJ3
Shared by  : JYJ3

Which idols are successful in holding two jobs?

Idol members have the charisma to hold the audience’s attention on stage and they attract fans with their different and fresh charisma on broadcast.

“Music-dol” Kim Junsu who performed in Mozart and Elizabeth, was chosen as the idol with the strongest ticket power for three years consecutively.

Park Yoochun is a case of an idol who transformed into an actor successfully. He received recognition for his work in Sungkyunkwan Scandal and Miss Ripley. Through Rooftop Prince, he was named “acting-dol” for receiving favorable reviews from the viewers and his colleagues.

Source :  Hankyung via Nate
Translated by : Shermin of JYJ3
Shared by : JYJ3
Please do not remove the Credits

As the campaign models of Nintendo 3DS’s Mario Kart 7, JYJ spent the time with participants in various programs such as racing, talkshow and quiz section.

In the first part of the event, 39 participants who had passed the preliminary rounds competed with each other. Each finalist then played the game with JYJ in the latter half of the event.

JYJ also selected a few participants and then split themselves into groups to play the balloon battle and the Mario Kart racing game. The winning team won JYJ autographed items.

When asked if the falling-off-the-chair scene in the advertisement was an act, JYJ’s Kim Jaejoong said: “It was not an act and it was a real-life situation. I was rather hopeful that it would be used in the advertisement,” provoking the audience’s laughter.

During the quiz section, JYJ fans did not encounter any problems in answering questions about the seating arrangement of the JYJ members in the advertisement and the Mario Kart 7 game.

Source : gamemeca
Translated by : Shermin of JYJ3
Shared by : JYJ3
Please do not remove the Credits

[TRANS] Men together haha. Coffee and arcade games during the day…

END_OF_DOCUMENT_TOKEN_TO_BE_REPLACED

Now that MBC’s Time Slip Dr. Jin done and over with, JYJ’s Kim Jae Joong and actor Jin Yi Han took advantage of their free time and hit the arcades. 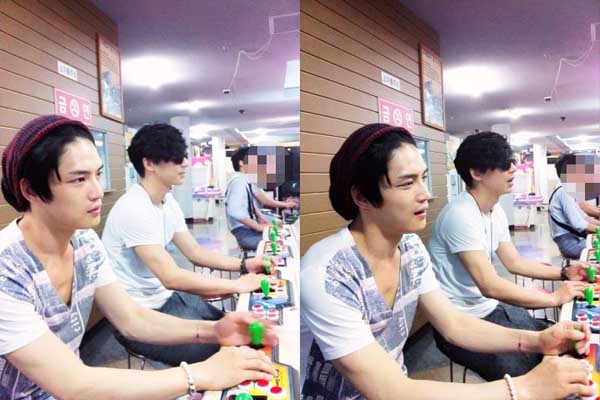 On August 22, Jin Yi Han tweeted, “In the middle of ppyong ppyong (Sounds of the arcade) keke. Concentration…the best! We’re playing like this.”

Attached to the tweet were four pictures of Kim Jae Joong and Jin Yi Han playing games at the arcade. While Jin Yi Han smiled for the camera, Kim Jae Joong seemed so completely lost in his game, he couldn′t even look at the camera.

Netizens commented, “It’s good to see them together after the drama,” and “Fashionistas who wear sunglasses to the arcade.”