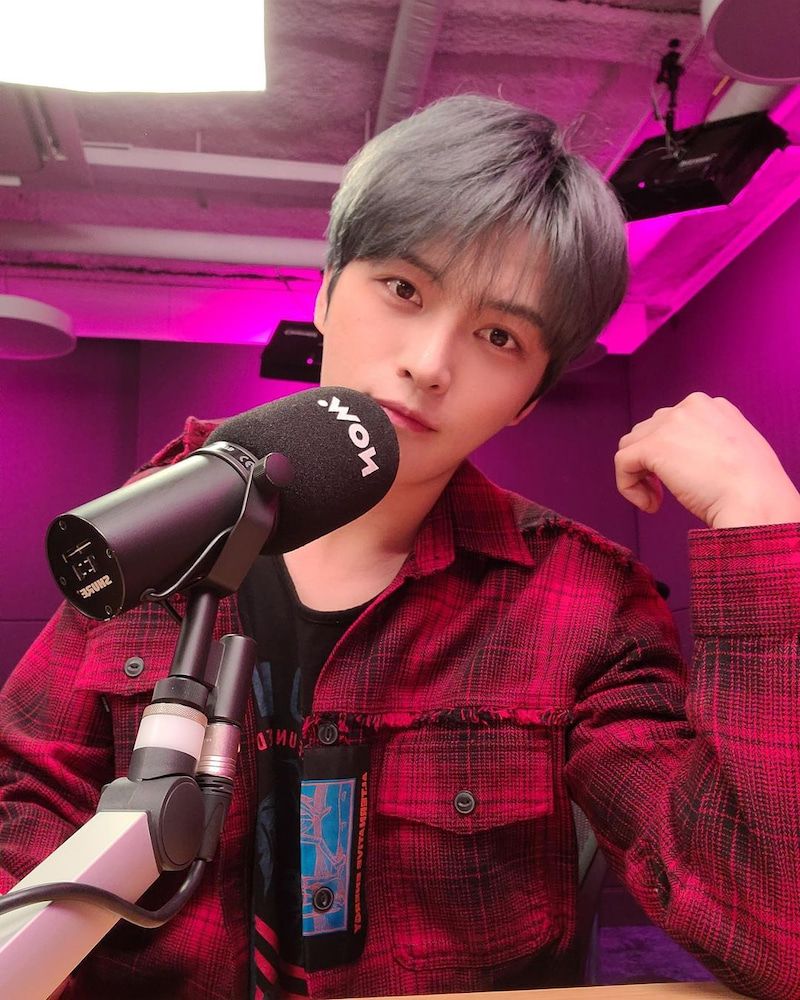 JJ: good times pass fast. Today too let’s have fun. “Where are you? What are you doing now?”

JJ: Hello, it’s a beautiful night, isn’t it? I put pretty flowers on the mic. They were from fans. It’s already been 5 days. The fun time flies so fast. But let’s have a good time today as well.

Everyone, let’s shout! Director! Let’s shout. Oh, it’s nighttime, so don’t shout out loud.
He told them to not be embarrassed

First story from JAEREA who wants Jaejoong to have his own show in NAVER NOW. Jaejoong wants a program where everyone can share feelings, happy and sad.

JJ: I don’t know the theme, but I think it would be nice if we could create a program where we can share people’s feelings with each other, with joy and sadness.

Spending time at home.
JJ: I turn on the alarm when I have plans for the next day, but it’s hard to wake up without an alarm, basically I don’t want to wake up early, but on days when I don’t have work, I sit around in bed lazily.

Jaejoong said when the weather so nice he opened the window on his house for all day, there were so many pollens. So he got runny nose. And said sorry because of his voice sounds different.

A fan said she listened to Jaejoong – All Alone a lot. Before when she walked and listened to the song, the wind blew and blew away some flower petals.

She asked how Jaejoong wrote that song. He said once he was in his studio at home and when he opened a window, the ray of light hit him in that dark room. And he felt how lonely and alone he was.

JJ: While listening to the lyrics, I wanted to make a song like this, but now my style has changed a little, but when I was working in the studio, I saw light, I saw light in the dark room, but it wasn’t like I saw hope. Please listen to a sad song.

나만의 위로! My Only Comfort

It’s a song that was released in 2013 “Healing for myself”, It is a song I made in the same room as when I made all alone, but not the ballad. I did when I was in a group. It’s the voice of our fans when we were in the group.

JJ: I made this song myself when i didn’t have anyone to work with. There was a time when I felt a lot of things and I wonder what kind of healing I wanted at that time? The song was short. I remember wondering if i could sing it on a music show.

JJ: “9+1#”
I had a rock disease those times. Fans seem to like it. Now I’m embarrassed thinking about it. I had to have a husky voice, and my way of walking was kind of like a person with a backache. On concerts I wear jacket only and leather pants. But I don’t do it these days.
Jaejoong said he calls it nine-one. He said he got rock-disease at that time.
Jaejoong also showed how he walked when he had rock-disease.
Jaejoong said he doesn’t know why he did like that
Jaejoong said he didn’t need top. He just went topless and jacket. He even wanted to go really topless with just pants.

I’m fat now, so it’s not like I won’t take it off. My stomach is not sticking out yet. I’m still hungry.
Some fans like how I look when I have “rock fever”, but I’m really embarrassed. Even in the cold season, you can be naked. You don’t need a T-shirt when you lock it, just a jacket naked. All you have to do is take off your jacket and put on your pants.

Jaejoong said he imagined fans smiling and happy faces when he decided to put the song in the album.

Jaejoong said he’s not confident with rap. He said when he was active with the FIVE, he rapped a bit in Wrong Number.

Jaejoong asked for tissue and they gave him napkin. He said because this place gave away lots of chicken.

Jaejoong said he was still in his rock-disease at that time where he taught he could do everything.

About JJ’s rocker disease… He’s mentioned thia in the past. It’s not about rock. It’s about his attitude towards it. This rockstar persona he created for himself that time, which he copied from western rock scene. He still loves rock.

Jaejoong telling again that he wiped his runny nose to the mic. Saying that all singers really understand about this.
JJ: What do you think you will do if you have a runny nose while singing? There’s only one way. I’m going to wipe it with a microphone. There’s no other way, right?

From NoX or Number X, Jaejoong called the album. He said he wasn’t fully recover from his rock-disease He wanted to have fun with the song.
Jaejoong said in the concerts usually his fans pretend to be pretty, act pretty. But when he started singing Good Luck, they loosed up and enjoy the concert. He said the fans’ cheeks were so round like Shin-chan as they were so excited.

JJ: Right away i think this was a fun song. I wanted to create a song that everyone enjoys while they shale their heads in concert venues. A song that can relax and encourage everyone to sing.

JJ: There are stories about more interesting performances than cool ones.I think there were many times when I laughed on stage and cried when I got off stage. In sad songs, I miss the stage where I shed tears and share many emotions with everyone. I hope we can do live together soon.
JJ: I miss the space where I can share a lot of emotions with you…I hope that this difficult time will pass soon and that I will be able to perform live.

Jaejoong said I’ll Protect You is the song he always sing it at the end and some fans feel upset whenever he doesn’t sing it.
Jaejoong said this isn’t the last song, it’s a mid song~
JJ: We’ll give you “지겨줄게” (I’ll Protect you) that we always do in encore. It’s not over yet, but today is the last day of the special host, so I’d like to play 지켜줄게.

Jaejoong said it’s his favorite part, reading stories~
The story said she stalked someone on instagram and accidently saw the instastory, Jaejoong said he knows how it feel and it kinda like giving false hope.

“I started posting on IGStory because I didn’t want to be searched for posts on Instagram.”
JJ: I know that! But don’t be shy. You even sent me a message, but it’s not comforting, so I’ll give you chicken as a present!

A fan said he dreamt about Jaejoong and won lottery even tho it’s not a big amount, ₩5.000 three times. Jaejoong said he doesn’t have religion but he prayed for her on the spot. He said “God, Jesus, Buddha please make her win big, 1st place”

“My niece drew a picture just because it was my birthday, but it was a picture of a dinosaur. I always sing Tyrannosaurus songs and play with them.”
JJ: I think it’s a great story.I think she’s a good aunt and a cute niece.

The next story asked how Jaejoong get through hard time as she’s having hard time. Jaejoong said he doesn’t believe in fate and told her that it will definitely pass.

“Do you believe in fate? How do you live a drama-like life?”
JJ: I don’t believe in fate You may have a life like a drama, but you also need time to endure difficult moments. I think it’s important to have time to endure and worry now. There are times when I can’t get an answer.
You may not be able to travel or go abroad, so you may have more time to worry. It might be a good idea to believe in fate. I don’t know what to say because I don’t believe it.I think it would be nice to endure difficult moments while thinking about other fun things.

Jaejoong is reading “Today to, the night has come”

JJ: “It’s night again.I thought that when I grew up, I would have a drink of whiskey at a place where I could see the night view of the Han River.But that wasn’t the case.What kind of chicken should I have while drinking beer? Are they all like that?Are you what you envisioned when you were little? It’s night again.»

JJ: That was a realistic sentence. I’m talking about alcohol all of a sudden, but it’s good to eat chicken feet while drinking soju. Drinking whiskey at the Han River view is not the only thing that makes me happy, and I don’t think people will change people.

A fan who lives in province said Jaejoong used to be like a star very high up there, on the sky, but now he’s really humane. She also said he’s like a Peterpan who doesn’t age. Jaejoong also felt the same with his idols. He also said he’s just like neighborhood’s oppa or uncle.

JJ: I’m human when I meet my favorite celebrities. When I actually meet him, he’s a neighborhood young man. Everyone in Seoul may be wondering where to go to meet Jaejoong, but I might be eating chicken feet and drinking soju at a restaurant where grandpa and grandma are located.

Jaejoong denied he isn’t aging and said he isn’t a Peterpan. He said we can age together as our relationship is like family, let’s be happy together.

JJ: If you don’t think aging will come, it’s going to happen. It’s coming to my body. Let’s all live healthy together. Let’s happily eat delicious food and work out while living happily.

Jaejoong said this is the last story.
She said “our oppa did great, right? Please applause for him” and there’s clapping sound effects.
Jaejoong said NAVER is the biggest side in Korea so his friends to listen to the shows and said he did very good and should continue

Jaejoong said he wants to do NAVER NOW for a whole year to but his overseas (Japan) schedule is already fixed long time before. He said it’s not called radio show but audio show.

JJ: “Thanks to Oppa, I was happy every day.” No, it’s nice to be praised. Naver, everything is on it, so people who know it happen to listen to it and ask, “Why don’t you continue?”Don’t you call yourself a DJ these days? DJs are the ones who only use audio.I don’t have any overseas schedules these days, so I really want to do it!
You’re still calling it DJ? What do you call a host? It is a host on Now and a DJ on Radio. I like using “host”. Please come back sometime. It happened because I don’t have plans to go abroad, but I want to do it all year round. You can do it once a year? Once a week?