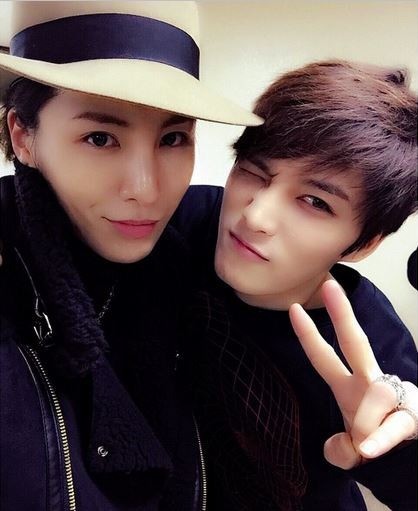 K-pop idol singer Jaejoong appeared in a selfie with musician-actor and close friend No Min-woo that he shared on his birthday, Monday.

No posted the photo on Instagram, captioning it “Let’s live life, we only get it once!”

The singer-actor currently stars in KBS drama “Spy” as a covert government agent. The suspense-filled drama airs every Friday at 9:30 p.m.

END_OF_DOCUMENT_TOKEN_TO_BE_REPLACED

JYJ3’s Note: No Min Woo is a South Korean actor and musician. He debuted as a drummer in TRAX in 2004, his stage name was “Rose”, leaving the band two years later. In 2008, he began acting in various television series and movies, he regularly contributes to movie and drama soundtracks. In 2013, he made a comeback as a singer under the stage name ICON. (Read more here)

Q: Recently you post 2 photos of you and Kim Jaejoong on Instagram. How did you become close with Jaejoong?
A: Actually we was in the same company and we met there when we was 16. We watched each other grow up. I think time flies very fast. I can’t become close with celeb friends who assume a haughty manner (literally, give oneself airs). But Jaejoong and I are both unchanged. He listens to my story. And since we both love rock, we talk a lot about music.

Q: I think you 2 have many things in common. Are you given impetus from him? What’s the meaning of his presence to you?
A: We share the same dream and we do both music and acting. That’s our common points. There were tough moments but we all overcame it. To me, he’s mental support, a healer. We also tell each other “Let’s look forward to the future!”

“See you in my dream”

[TRANS] These characters are too cute so I drew them while reading the script.

END_OF_DOCUMENT_TOKEN_TO_BE_REPLACED

[TRANS] Buddy-buddy with Minwoo and Hyesu nuna^^ Had fun yesterday
Working out now..What a season it is where the sun comes up late.