– Before The Press Conference started, when Yoochun was sitting, he asked the Spanish translator: “¡¿Qué te pasa?!” (What happens to you?!) and no one noticed …. Yoochun just laughed. He also said: Hola ¿cómo estás? (Hi, how are you?) …. And laughed (via: @freahki)

– In the press conference the boys smiled a lot, they were fun …As for the reception of fans, said that because they were traveling two days they came very tired, but when they saw the euphoric fans, they forgot the fatigue … (via: @freahki)

– They were very tired, but at the moment they reached the airport, they decided to exit without security. They had heard that Chile was a country very “crazy” and decided to leave the airport without security to be closer to their fans … They are very happy. Because they really wanted to see the Chilean fans. (via @yurimin)

– “We are happy to fulfill our promise to our fans and we will prepare a perfect presentation to match the Latin American passion”
“The countries are widely spaced, with 30 flying hours. Also, although the countries are far away, we’ve always been very close, ” they added. (via: Meganoticias)

END_OF_DOCUMENT_TOKEN_TO_BE_REPLACED

On their first visit to Chile, JYJ commented on their experience with their fans and how happy they feel regarding their concert in Santiago.

“The view of the hotel is stunning, I have never seen it before (referring to the mountains).  I have noticed that is calm, different from what people think in Korea,” Yoochun stated during a press conference today at the Hotel W. In addition, the members talked about the delay of their flight to this country and also about the love that fans have sent them with kisses and hugs.

The group consists of Jaejoong, Yoochun and Junsu, musically debuted as part of another group called TVXQ* in 2003 with two other singers. JYJ has officially been around as a group since 2010 and together they have achieved several successes, such as their single with American musician, Kanye West and a topping world charts with their album sales.

The boys will perform a solo concert at the Caupolican Theatre this Friday, March 9 with the support of six dancers. Their last stop in South America will be in Peru. Both VIP and Preferred tickets are sold out.

Credit: Publimetro
Translated by: popopiluvsjyj of JYJ3
Shared by: JYJ3

At 4 PM this Thursday, the group held a press conference where Jaejoong, Yoochun and Junsu posed in front of cameras and gave thanks for being in this country.

The popular JYJ trio is currently in Chile to hold their long-waited for concert on Friday, March 9 at the Caupolicán Theatre.

For this reason, the group appeared before national media for a press conference where they discussed their trip and other topics.

At 4 PM,  Jaejoong, Yoochun y Junsu posed in front of cameras and gave thanks for being in Chile.

Despite being in the country for only few hours, during the event, the group commented on how much they were surprised by the Chilean culture.

Also, Junsu expressed his views on music piracy, a controversial issue, to which the group assured that “music is a language that unites all.”

In addition, the group has scheduled a second performance in South America on Sunday, March 11 in Lima, Peru.

Credit: Meganoticias
Translated by: popopiluvsjyj of JYJ3
Shared by: JYJ3

END_OF_DOCUMENT_TOKEN_TO_BE_REPLACED

The member of the K-pop group were welcomed by hundreds of fans who didn’t keep the order in the airport of Santiago de Chile.

After delays in the flight which was bringing the members of the Kpop group JYJ to Chile, finally they arrived to the Southern caital in the middle of chaos, according to the reports of the fans who went to receive them at the airport.
Through their facebook page, the fan club informed that even although they were well organised at the beginning to avoid the mess, there was a rumour about a change in the exit JYJ would use after taking off.
According to JYJ Fans Chile, that provoked the chaos at the airport, as the human barrier created to protect them was broken.
“The boys crossed the screen area and people run to see them. Few guards went there. Chilean policemen just looked, nothing else and they didn’t help at all”, they describe in their Facebook page.
“Yoochun was the first one who left and he got in the car quickly. After him, there was Junsu’s, who seemed very tired and scared. Jaejoong was the last one and he was smiling,” they added.
Source: RPP Noticias
Translated by: Minhato
Shared by: JYJ3

This Friday 9th of March in Theatre Caupolicán, the k-pop group, was it’s called the music for Asian teenagers, is presenting awho for their loyal fans, who are already camping in the venue in San Diego.

40 journalists from their country are coming together with the Korean band JYJ, who is offering here only one concert. This is the comercial dimension that it’s given in this Asian country to the bands belonging to this kind of music called K-pop, which mixes Occidental canons with the vocal interpretation proper of Korea.

The group is coming with 6 dancers and 5 stylists, besides a Korean chef and another Chilean, especially requested by their production.

JYJ is a band formed by Jaejoong, Yuchun and Junsu, singers who are famous in their country as they belonged to the group Dong Bang Shin Ki (known also as TVXQ), one group of idols with Asian male vocal style. In 2011 they joined forces with the American producers Kanye West and Rodney Jerkins, to record their debut album “The Beginning”. The American musicians even lend their voices for some tracks.

Korean music is getting more fans in the country and, for that reason, the Korean TV has made documentaries and MVs of their artist because of the euphoria caused in Chile.

For a couple of days the teenager fans of this type of music are camping in the surroundings of Caupolican Theatre in the street San Diego.

The most expensive tickets for the concert are sold out (VIP $70 thousand, cancha $40 thousand) but there are still some general tickets available (their price is $25 thousand) in Feriaticket or the shop Anime Center del Eurocentro. 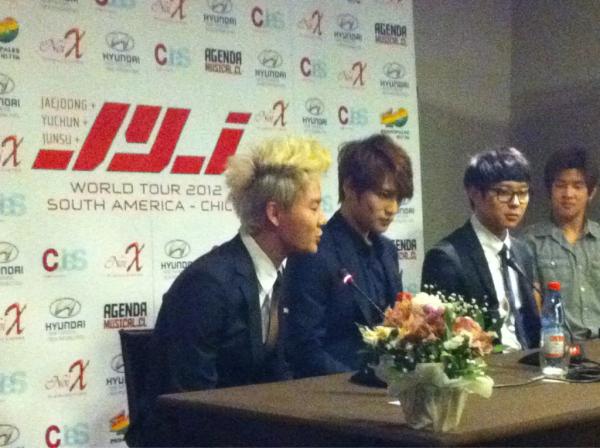 *Notes from the translator (@cbeitia9):
it’s not on the TV the press conference, I’m just translating what I read on the twitter of Mega(Chilean Channel)
**FYI: JYJ Press Conference will be aired in the Central News at 9PM