Jaejoong: I just picked up the crumb dropped on the table and ate it. You know the 3 seconds rule, right? If I dropped a candy on the ground while I was playing in my mouth, I would pick it up and put it in my mouth right and chew it up. Even if sand got on it, I just ate it. Beware! Please don’t do that everyone, not good for your health.

10 seconds mission that’s given to him! Check the video clip & #tgif with him!
https://www.instagram.com/p/BUYL8dwh93h/

10 seconds mission that’s given to him! Check the video clip & #tgif with him!

30 min before Rebith of J Thailand

Jaejoong: Target located! When does the 10 sec start? From now? Start now? I did film it!
I filmed eating program in Thailand It’ll be broadcasted so please watch it! It’s already 10 seconds! What is this??? 🤣 Watch on May 25

END_OF_DOCUMENT_TOKEN_TO_BE_REPLACED

Non-fans who attended the concert probably flocked to d/l NO.X album from iTunes ^^

END_OF_DOCUMENT_TOKEN_TO_BE_REPLACED 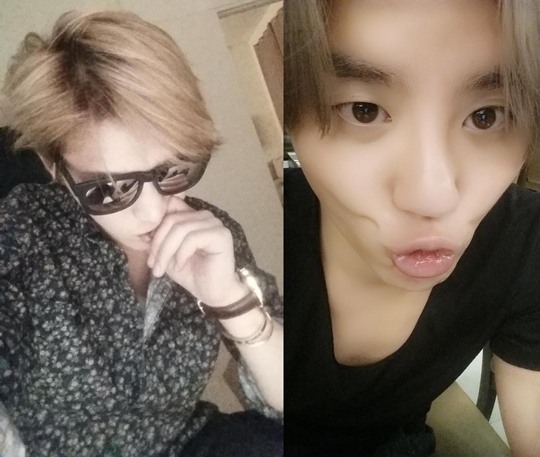 JYJ’s Kim Jae-joong and Kim Jun-su both released selfies with different charms on Twitter on Sunday, wowing the fans.

Kim Jae-joong went funny-chic, featuring Gangnam style in a flashy shirt and sunglasses. In the photo, the singer is looking away from the camera, biting his index finger. With the selfie he wrote, “Let’s call it a day. Darkness fell so soon.”

On the other hand, Kim Jun-su made a funny face, sticking out his pink lips. “Sorry for being too much for a 29-year-old,” he wrote.

END_OF_DOCUMENT_TOKEN_TO_BE_REPLACED

Expressing their gratitude for the hard-working staff, JYJ’s Park Yoo Chun and Yun Eun Hye are sending the entire staff of MBC’s I Miss You to Thailand.

With the drama series ending on January 17, the two leading actors decided to gift the staff members by sending them to Thailand, where they can forget about the struggles of fighting against the harsh winter temperatures during the shooting of the drama.

According to a drama affiliate, the majority of the costs will be paid for by the actors, while a portion will be covered by the production company.

The staff will be leaving for Thailand either on January 20 or 21 and will stay there for four nights and five days. Due to scheduling conflicts, it’s uncertain if the acting team will be participating in the trip.