K-pop bands JYJ and TVXQ may confront each other at the upcoming premier event of the film “Big Match” for the first time since JYJ quit TVXQ in 2009, a local online media outlet reported on Monday.

The two remaining TVXQ members, Shim Chang-min and Jung Yun-ho, will also be present at the event to support singer-actor BoA of S.M. Entertainment. 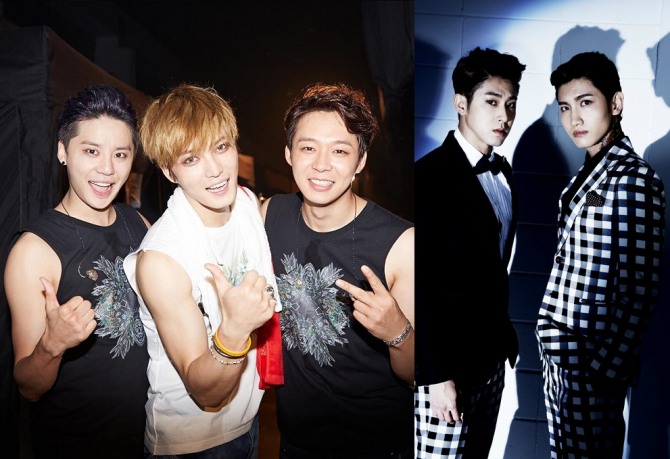 The two boy bands have never attended the same entertainment event since the split in 2009. The JYJ members filed for an injunction against S.M. in mid-2009, alleging their 13-year exclusive contract was unreasonably long.

END_OF_DOCUMENT_TOKEN_TO_BE_REPLACED

The author of a recently released book on K-pop has revealed that SM Entertainment pressured his publisher to remove references to JYJ and the TVXQ! lawsuit.

This came to light when one of our favourite bloggers, Oegukeen (who has previously written a guest post for us on inter-cultural relationships) wrote an in-depth review of Mark James Russell’s book K-pop Now!: The Korean Music Revolution’.

Like we (and other reviewers) previously noted, she pointed out that there were odd inconsistencies in the book in the way TVXQ! and JYJ were covered. However unlike those other reviews, this time the author took the time to directly respond to the criticism in the comments of Oegukeen’s blog.

Russell confirmed, as we had suspected, that this effective deletion of JYJ from K-pop history was the result of interference from SM Entertainment. He said:

“Yes, I agree with you about the JYJ/TVXQ issue. But, alas, that was not my call. SM Entertainment was quite adamant about how TVXQ was covered. Which is too bad, as I really liked Xia’s “Incredible” (among other songs).”

Of course this did not go down well with fans of JYJ who questioned the author’s integrity and, rightfully, used it as further proof of SM’s meddling in the group’s affairs despite being told to stop interfering by the Fair Trade Commission. END_OF_DOCUMENT_TOKEN_TO_BE_REPLACED

Translator’s @crystalmoon64’s Note: After Junsu sang ‘Hug’ and danced to it, fans started chanting TVXQ so Jaejoong tried to respond to it and wrap it up smoothly. He never said he missed the others or wants reunion. He merely recognized the fans’ feelings. Watch from about 2:30.

[Translation from Korean to English]

“As you feel TVXQ as a memory we do the same. If things work out (among our members) later… It would be nice if we can look back and talk about the fun memories… We debuted 10 years ago… We can talk about this since a long time has passed… Now, let’s moving onto the next song…”

@Ohmyjunsu’s Comment: The Chinese translator in Beijing distorted what Jaejoong originally said in Korean during his ment.
He did not even say ‘5 다섯’ in Korean, so how did the Chinese translator get ‘我们五个人 / the five of us’? This isn’t a mistake. She’s lying.
Seems like the translator was an OT5. Know your place. You are there as a translator, but instead you use your position to spread delusion.

[OT5 Translation from Chinese to English]

Jaejoong: “Like how everyone misses TVXQ, we miss them too. Hope the five of us can stand together on the stage someday.”

Jaejoong: “Singing Hug for us is like how everyone missed TVXQ… If we have this opportunity, we wish we can be together and start all over again..One day we wish we can perform as 5 for everyone… Our hearts has never changed since the beginning”

JYJ3’s Note: As you could see OT5 Translations is really different compared to the translator @crystalmoon64.
Some fans think we hate everything related to TVXQ5 which is not true, TVXQ5 is a beautiful memory to most of us too, because JYJ was part of it. But this doesn’t mean we will spread wrong information to force the reunion.
We JYJ’s fans live in the present, and the current present is JYJ.

“The two who stayed and the three who had stepped out. If we are happy now…”

Prior to the release of his recent screen debut ‘Sea Fog’, Park Yoochun opened up in an interview with E-Daily’s Star in, to say, “I was happy,” at the question that assesses his activities after the TVXQ breakup. He added, “But, as time went on, such thoughts came. It was about what to do actually. It had been a choice for each of our [respective] lives. I have no inclination to hate now. I truly hope they all are happy”.

While he “hope all of five people do well”, Park Yoochun reminisced about his old colleagues: “Thus I don’t even know when we will all get together, but if we are able to have a drink of soju –it’s not quite good to in of itself–, I want to”.

Source: Star in via Daum
Translated by: rilanna of JYJ3
Shared by: JYJ3

K-pop is an extremely competitive genre, a small country with a population of merely 50 million people produces new artists literally almost every day. The industry is like a ruthless stepmother: once you make a serious mistake, it might cost you your career and more.  Career ups and downs are normal in an artist’s life but in K-pop, once you reached the lowest part, it is very difficult to climb up the mountain again. Ultimate K-pop Survival Guide will be a short series on artists who have managed to turn their failing career from point zero back again or who had gone through a lot of hardships and still managed to remain successful. Not only rookie artists but we, the audience, can also learn a lot from them.

Avoid them as if they were lepers

The first installment of the series is dedicated to perhaps the biggest survivors of the dark side of K-pop:JYJ. Everyone knows what they have been through, but it doesn’t hurt to summarize and focus on how they actually managed to cope with the situation.

For the uninitiated: once there had been an idol band we can possibly call one of the greatest successes of K-pop ever: Dong Bang Shin Ki, or by their English abbreviation, TVXQ. The five-member boyband, consisting of Jaejoong, Yunho, Yoochun, Junsu and Changmin, was among the first successful wave of K-pop to set foot in Japan, and with blood and tears, they worked their way up the ladder, from performing to a mere handful of fans to filling the 50,000 seat Tokyo Dome in rows. Their fandom, Cassiopeia, was certified by the Guinness Book of Records for being the largest official fan club in the world. They reached unimaginable heights in Asia, thus their break-up was probably one of the biggest shocking events ever to shake the world of K-pop. Not because boybands are supposed to last forever, but because they were at the height of their careers and were known to be close to each other. When the news broke out that Jaejoong, Yoochun and Junsu started a lawsuit against their agency S.M. Entertainment, to nullify their 13-year contract, at first everyone hoped there could be a settlement but in October 2009 the Seoul court ruled in favour of JYJ, and as a result, the Fair Trade Commission started advocating the use of ‘model contracts’ to prevent agencies from having artists sign excessive deals.

END_OF_DOCUMENT_TOKEN_TO_BE_REPLACED

JYJ3 Note: This article doesn’t reflect the opinion of JYJ3 Team, only the author.
The arbitration meeting date it’s set for August 10th.
There is no final verdict date.

Word out of Korea is the final hearing/announcement  of the verdict which was supposed to happen on July 19 2012 has been delayed.

According to translated reports, the reason for the delay is because SM requested a mediation/arbitration meeting.  Some say this is another SM delay tactic, while others think SM is seeking a private solution to prevent having a public court judgment entered against it.

According to a report, both parties “must adhere to the court’s decision once it grants arbitration”. (1)

SM applied for arbitration this last time on July 11 2012.  This may suggest that the Court decision is not in SM’s favor and the company is seeking to end the dispute without having a Court ruling against it.

But this isn’t the first time SM has sought arbitration.  Previous attempts at arbitration by SM failed, which resulted in the restart of the hearings aimed towards concluding this approx. 3 year case. (2)

END_OF_DOCUMENT_TOKEN_TO_BE_REPLACED

Recently the issue of violence against a fangirl has emerged with much heat. The famous Hero-Jaejoong of TVXQ was caught inflicting verbal/physical offense, the proof recorded as a mp3 file and up online. However, there is a lot more to this issue than what was disclosed in the media. The Korean fans had known all along that someday, there would be hell to pay because of the PRIVATES. Who are the PRIVATES? Just keep reading and you’ll find out.

Below is the original version of the recording.
“Dispatch,” the broadcast company that published this recording, purposely cut out certain parts of the recording to make it sound like Jaejoong constantly swore and inflicted physical offenses to a innocent fan girl. When in truth, this is not what had happened. NOT AT ALL.

Violence is not acceptable and inexcusable in any kind of situation, but in this case, one needs to understand the reasons behind this seemingly appalling act, and WHY this happened.

this will educate you about DBSK/TVXQ on a whole new level, since Asian fans did not bother to mention this aspect of TVXQ’s stardom when spreading news.

END_OF_DOCUMENT_TOKEN_TO_BE_REPLACED

JYJ3 Note: Nikkan Cizo is a Japanese Tabloid that reported about the possible reunion of THSK through AVEX . Please take the information with a grain of salt.

[JAPANESE NEWS] 120122 “Will Tohoshinki be Avex’s Savior?” The surfacing of reuniting Tohoshinki Project.

The day the five people together again is coming?

Early in the year Avex was shaken by the news of Ayumi Hamasaki’s divorce announcement and in the end the project of reuniting Tohoshinki was brought to surface.

“Avex crammed Ayumi’s PV since debut and special video footages into a DVD-Box and put it on sale on New Year’s Day. We can see that Avex and Ayumi is battling it out, using the hot excellent card of ‘divorce’” (Music insider)

Also, along with Ayumi, Avex’s ace, EXILE also put out their PV compilation at the same time, but it seems that so far the sales didn’t reach their target.

“Adding to the continuous recession in the music market, time has come that (one) cannot sell based only on music. Avex changed their strategy to adding the special edition PV from previous albums etc as freebies and extensively marketing it. It’s okay since Ayumi is under their management, but EXILE and Amuro Namie aren’t from their company and are under other management, they do not get much profit.” (Music insider)